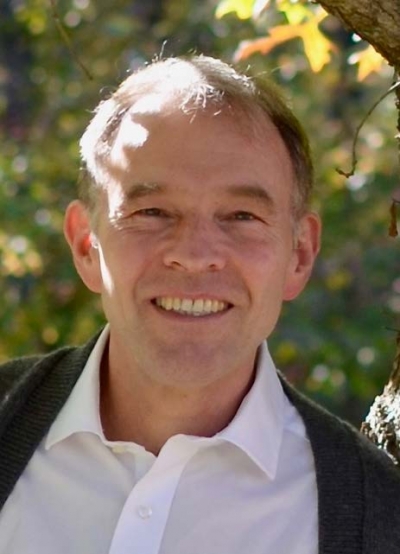 Christoph Schmidt wants to understand the physics of living materials such as cells, tissues, and organs. How does a cell generate forces and move, or sense its own size and shape? How does an animal sense its own motions?

In Schmidt’s mind these questions are crying out for attention from physicists. “In the last half century or so, people have had a strong focus on molecular biology,” he says, “whereas the knowledge of physical properties—say elasticity or dynamics—and the physics of matter inside cells or tissues are really underdeveloped relative to the biochemistry.”

Schmidt joined Duke Physics in September 2017 as a full professor. He came to Duke from the University of Göttingen in Germany, where he still maintains a large lab. He will bring his lab to the French Family Science Building in the spring of 2019.

He hopes his discoveries will further our understanding of complex materials in general and living systems in particular. Some of his work with colleagues in engineering and medicine has the potential to fuel advancements in medical technology.

“We want to understand the complex interplay of sensory mechanisms, driving forces, and mechanical properties in different contexts,” he says. “It’s a set of questions that applies to many different organisms.”

In one set of experiments, he is studying fruit fly larvae, which move by contracting and expanding body segments like accordions to move forward or backward. This requires muscle coordination, which in turn requires the central nervous system to keep track of how each body segment is deforming. The nervous system does this with the help of sensory organs that are suspended on the inside of the outer shell like guitar strings.

These organs can generate force as well as sense deformation. Schmidt measured the elasticity of these string-like organs and found that they keep themselves in a tense state, which allows them to more sensitively react to external and internal forces acting on the larval body. He also measured the electrical nerve impulses generated when these organs are gently probed with a glass needle. These electrical impulses, called action potentials, are the language in which neurons communicate with each other.

In other experiments, he explored the properties of reconstituted proteins from the cytoskeleton of cells. He “polymerized” a protein called actin to create long filaments that form a dense network in a buffer solution, similar to what the protein does in cells. Then he used a laser-based technique called microrheology to study the mechanical properties of the filament networks.

An integral component of Schmidt’s work is the challenge of reworking traditional physics tools for use with biological systems. For example, statistical physics is usually used to describe the average behavior of many particles in non-living systems, such as ice undergoing a phase transition to water. In this system, only one type of molecule is described—H2O. But biological systems are highly heterogeneous, containing thousands of different types of molecules—such as sugars, lipids, and proteins, and more—making a statistical description much more difficult.

Duke physics professor Glenn Edwards, who also uses physics to study living systems, says that Schmidt’s work adds a new level to research already being done in the department. “In my opinion, Christoph is one of the best in the world at what he does,” he says. “He has done some beautiful work where he’s taken subsets of key molecules in living systems and clarified their physical properties.”

For Schmidt’s part, because his work is by nature interdisciplinary, he is excited to be coming to Duke with its medical school, engineering school, and culture of interdisciplinary collaboration. “It feels like a very good position to be in, to be able to collaborate with cutting-edge research being done here already and contributing something that’s to some extent still missing here.”

To encourage collaboration within Duke and with other institutions, he is setting up a center for soft matter studies, with incoming faculty member Michael Rubinstein. The center will have a broad focus on soft matter studies, including living systems, synthetic polymers, and other materials.

A native of northern Germany, Schmidt studied in Munich and has also lived in Boston and Ann Arbor. His two children, whom he raised in the Netherlands, attend college in Boston. He enjoys the outdoors, hiking, and biking—he rides his mountain bike to work from his temporary residence near West Campus. As time allows, he’s also an avid woodworker, and is looking forward to moving his woodworking tools here from Germany. In the meantime, he’s exploring Durham and the environs. “I like the old factory buildings and the architecture,” he says. “There is a lot of history there, and it’s being used now in many creative and interesting ways.”

Mary-Russell Roberson is a freelance science writer who lives in Durham.